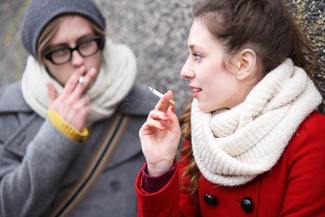 In an effort to protect youth from taking up smoking, the Heart and Stroke Foundation and the BC Lung Association are urging Canada’s Health Ministers to move quickly towards a national ban on menthol and other flavoured tobacco products when they meet in Vancouver during National Non-Smoking Week (Jan. 17 to 23rd).

“Until we ban all flavoured tobacco products, tobacco companies will continue to exploit gaps and loopholes in regulations and find new ways to market their products to youth, like industry’s latest gimmick of cigarettes with squeezable menthol capsules in the filter now available in many Canadian stores,” said Adrienne Bakker, CEO, Heart and Stroke Foundation, BC & Yukon.

“Now is the time to address the patchwork of legislation that exists across Canada with regard to flavoured tobacco products. In the absence of federal action on flavoured products, a number of jurisdictions have moved ahead and banned them, including menthol. Others, including BC, are awaiting federal movement on the issue,” said Bakker.

“Last year BC Health Minister Terry Lake agreed a national strategy was necessary to create consistent standards on the issue of flavoured tobacco use,” continued Bakker. “Given the new federal government’s commitment to strengthening the federal tobacco control strategy, and BC’s support for tougher regulation, we’re hopeful action will be taken.”

“The national Youth Smoking Survey for the 2012-13 school year found that among high school students who smoke daily, 43 per cent smoke menthol. In sharp contrast, only 5 per cent of adult smokers use menthol cigarettes.  Any legitimate effort to reduce flavoured tobacco use among youth must include a ban on menthol cigarettes,” added McDonald.

The Heart and Stroke Foundation and the BC Lung Association have formed a partnership to raise awareness of the harms of second-hand smoke and to advocate for smoke-free environments for all workers and the public. cleanaircoalitionbc.com

The Heart and Stroke Foundation’s mission is to prevent disease, save lives and promote recovery. A volunteer-based health charity, we strive to tangibly improve the health of every Canadian family, every day. Healthy lives free of heart disease and stroke. Together we will make it happen. heartandstroke.ca

For more than 100 years, the BC Lung Association has led the fight for healthy lungs and healthy air. The BC Lung Association is the leading BC organization working to save lives, prevent and improve lung health through research, advocacy, education and support. When you can’t breathe, nothing else matters. bc.lung.ca

1. Clark, Pamela I. et al, Menthol Cigarettes: What do we know? A background paper presented to the World Health Organization, November 2008.