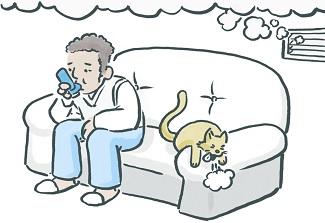 With paper thin walls, the sounds and smells in John’s Vancouver condominium drift easily from unit to unit. Included is the second-hand smoke that he and his partner contend with on a daily basis.

“It’s debilitating when your neighbours smoke multiple packs of cigarettes a day,” explained John. “The smoke seeps into our unit and blankets everything – furniture, carpets, even computer equipment.”

John first notified his Strata Council about the second-hand smoke in December 2014. It took three months before any action was taken.

“By February, we had to completely lock up our second bedroom,” said John. “The smoke traveled in through the windows, vents, outlets, and walls. It was no longer bearable to even be in the room.

“We ended up having to remove our couches and entire computer and office set-up because the smoke seeped into and left residue on everything.”

When a member of John’s Strata Council finally came into his unit, they were taken aback by the pervasiveness of the smoke infiltrating his apartment from an adjacent unit.

“After visiting us, Strata Council fined my neighbours, but it only stopped them from smoking in their unit for a couple days,” said John.

“Within a week, my neighbours were smoking again, but when Strata Council followed up and told them to please stop smoking, they denied it and said they were not smoking.  Since then my Strata Council told me I have to find a way to provide proof they are smoking before they can apply any more fines, but how do I do that? The Strata Council suggested we install a spy camera contraption but we’re not comfortable doing that.”

“In my opinion if our Strata Council was to consistently enforce our bylaws and apply fines for each infraction, this issue could be resolved without getting lawyers involved.”

John is currently sending around a petition to all neighbours, asking that the Strata Council takes a more active role in monitoring smoking in the building.

“So far, the majority of my neighbours have been supportive,” explained John.

“My unit is not the only one affected by smoke, yet many people don’t have the time or energy it takes to see this issue through. I don’t blame them – it’s taken over a year of meetings, complaints, and letters and there has still been no solution reached. It's very frustrating,” he added.

Current provincial law prohibits smoking in most public places, and in all residential building common areas, but do not apply within a private home, patio or balcony. Making more buildings smoke-free is the only way to effectively protect individuals and families from the risks of exposure to second-hand smoke, and ensure all residents are equally protected. That’s why we, the Clean Air Coalition, are encouraging the provincial government to take steps necessary to stimulate supply in BC.

Read our 2016 report and recommendations here.