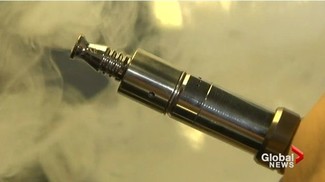 Given the normal delays that take place during and after an election, the only way to have protective restraints in place this calendar year is if an interim order is made using the powers of the Department of Health Act.(1) The group is concerned that waiting any longer will only increase the risks for Canadians and is therefore calling for party leaders to commit immediately, should they form government, to using an interim order within 60 days of forming government.

Currently the federal law allows promotions for vaping products on television, radio, billboards, public transit hubs, convenience stores, social media, newspapers and other mainstream media. It allows manufacturers to entice youth and non-smokers with attractive flavours, give the products away and
imposes no obligations for nicotine limits or health warnings on packages.
Key facts:

QUOTES:
“Youth vaping is now a public health crisis. There is mounting evidence for it and we need to act now instead of reacting later. We are calling on each political party to commit to enact or to support an urgent interim order.” Dr. Sandy Buchman, President of the Canadian Medical Association

“This crisis was created by inadequate regulation and irresponsible marketing,” The relaxed rules set by Parliament last year allowed tobacco and nicotine companies to flood the market and promote these attractive, inexpensive, flavourful, kid-friendly devices through social media, on TV and through other means seen by young people.” Ms. Flory Doucas, Co-Director and spokesperson, Quebec Coalition for Tobacco Control

“Given the progress that has been made to reduce youth smoking, we do not need a new generation of teenagers becoming addicted to nicotine through vaping products. Simply put, young people simply should not be exposed to promotion for vaping products through their favourite social media channels
or by other means.” Mr. Rob Cunningham, Senior Policy Analyst, Canadian Cancer Society

“There is mounting evidence linking vaping to serious short- and long-term health harms. It is imperative for consumers to be aware on the risks before they use these products. Without health warnings or testing and reporting requirements, consumers will remain naïve to these risks.” Dr. Andrew Pipe, Chair of the Board of Directors, Heart & Stroke

“Even without the recent tragic reports linking vaping to acute respiratory disease and deaths, the products have been shown to increase the risk of cardiovascular disease, impaired brain development among teenagers and adverse pregnancy outcomes. People who both smoke cigarettes and vape appear to be at greater risk of disease than if they only smoked cigarettes.” Ms. Cynthia Callard, Executive Director Physicians for a Smoke-Free Canada

“Enough is enough. Strong measures are urgently needed to protect children and teens from these products. Close to a year ago, the government committed to regulate vaping promotions. We can not wait any longer.” Mr. Les Hagen, Executive Director, Action on Smoking & Health

“The government has a wide statutory duty to protect the health of Canadians and the power to put temporary regulations in place when immediate action is required to deal with significant risks to health. Such interim orders can be in effect for up to 12 months, allowing the next Parliament to develop
permanent reforms to the law and its regulations.” Mr. Michael Perley, Executive Director, Ontario Campaign for Action on Tobacco

“With this interim order, the vaping market can quickly be brought under the same kind of controls that are currently in place for tobacco products. This will prevent vaping companies from enticing young people with fun flavours like Peach Swirl or exposing them to promotions which are visible to the general public.” Mr. Terry Dean, CEO, Canadian Lung Association

1 Department of Health Act – Section 11.1:
https://lois-laws.justice.gc.ca/eng/acts/H-3.2/page-1.html#h-252966).
11 (1) The Governor in Council may make regulations to give effect to and carry out the objects of this Act.
(2) Every person who contravenes a regulation is guilty of an offence punishable on summary conviction.
Interim Orders
11.1 (1) The Minister may make an interim order that contains any provision that may be contained in a regulation made
under section 11 if the Minister believes that immediate action is required to deal with a significant risk, direct or indirect,
to health or safety.
(2) An interim order has effect from the time that it is made but ceases to have effect on the earliest of
(a) 14 days after it is made, unless it is approved by the Governor in Council,
(b) the day on which it is repealed,
(c) the day on which a regulation made under section 11, that has the same effect as the interim order, comes into force,
and
(d) one year after the interim order is made or any shorter period that may be specified in the interim order.